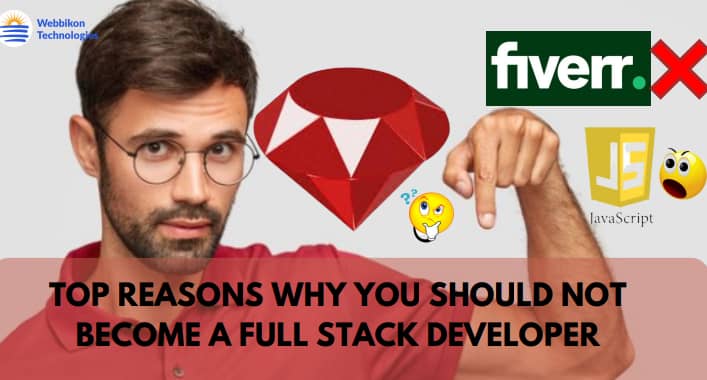 Becoming Full Stack Web Developer?- Top Reasons Why You Should not

Most beginners who are starting out in coding think they will make more money,

But is that really true?

Who Is A Full Stack Web Developer?

A full stack developer is someone who builds the front end of an application, which is the user interface.

A full stack developer is also someone who  builds the backend, building the API’s and code related to the database.

Reasons Why Becoming a Full Stack Developer Is Not Worth It?

If you are starting out in coding, don’t aim to become a full stack developer ,

because nobody is going to hire you to become a junior full stack developer.

There are a lot of courses out there that makes beginners study full stack development especially Bootcamp courses teaching you,

front-End development and then Ruby on Rails or Python and Djanjo.

And you make a huge payment to buy these courses as a beginner only to find out you won’t get hired as a junior full stack developer.

They do this because of how complicated the backend can be.

So they hire a backend developer to reduce technical problems on the backend,

instead of a full stack developer who will do both

In fact, the only companies that hire a full stack developer are usually startups,

We are talking of a team made up of just three individuals.

because they don’t have enough money to hire lots of backend and front-end developers.

3. Nobody Hires A Junior Backend Developer:

Companies don’t hire a junior backend developer because you are working with Important data,

the codes you are working with are so critical,

like you can literally destroy people’s records and the company’s security.

We actually have an article on: Nonchalance Mistakes Backend Developers Should Avoid.

This is why every good backend developer always starts on the front-end.

2. If you plan to become a Freelancer, becoming a full stack developer is advantageous,

because you can get paid for both the frontend and backend,

but you need to learn front-end development first to gain experience.

3. If you go to Indeed to check out salaries,

In essence, nobody hires full stack developers except start ups with limited funding.

You can see you make more money and do  less job as a backend developer,

but you need to have experience on the front end first or in programming.

Most Full Stack Developers in most companies are not paid but are paid instead as CTO( a CTO is someone who runs or overseas the technical affairs of a  company).

They get paid as CTO because they are helping everyone on the team, and you can never do that on a job.

Even if you get a job as a Full Stack Developer, you will do more jobs and get paid less, we believe this doesn’t sound good to you.

I hope we have been able to brighten your mind.

if this article is very helpful, please let us know in the comments, and share.

Lastly please subscribe for more by Signing up and getting notifications or clicking the bell icon to subscribe. Thank you!

You can also check out:Essential Front End Developer Skills To Get Your First Job

Efevwia Efemena is a Web designer/Developer who owns Webbikon Blog

He started his designing and coding journey in his first year in college.

Everything started when he bought a  course from a digital marketer at a bargain.

Learn JavaScript Online First  Before Learning React( This is Why)

[…] Becoming Full Stack Web Developer?- Top Reasons Why You Should not  […]